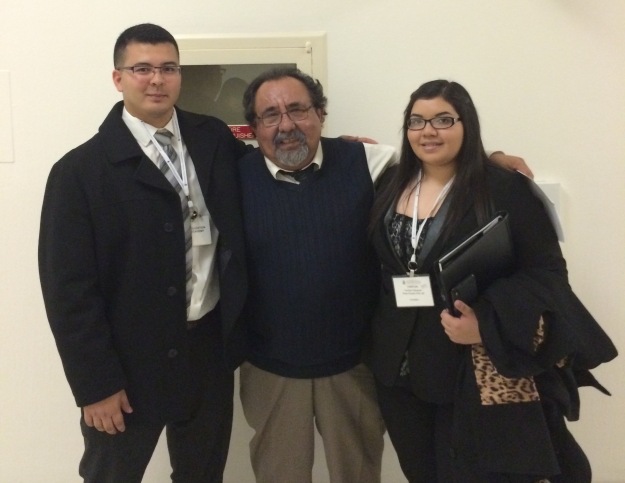 In addition to the meetings on Capitol Hill, the summit included many group meetings and sessions focused on the economic and workforce development role of community colleges. Sessions included distinguished speakers including: Dr. Jill Biden, wife of Vice President Joe Biden; and Thomas E. Perez, Secretary, U.S. Department of Labor.

Secretary of Labor Perez highlighted Pima Community College and his recent visit to our Aviation Technology Center in January during his speech for the closing of the summit as an example of successful efforts to address unemployment and economic development.

In addition, we were honored to be invited as guests of Congresswoman Kirkpatrick to attend the dedication of a statue of the late Senator Barry Goldwater unveiled in Statuary Hall. House Speaker John Boehner, House Democratic Leader Nancy Pelosi, Senator McCain, Representative Grijalva, members of the Goldwater family, and many other congressional leaders were in attendance for the dedication ceremony.

I want to thank Michael Peel for his great work in organizing and facilitating our congressional visits. I also want to thank Alec Moreno and Yaritza Vasquez for the leadership they displayed with our legislators as they recounted the positive impact of PCC on their lives during this critical time for funding for community colleges at the federal and state levels.

Yaritza is studying Nursing. She is an Upward Bound student from Desert View High School and graduated with a 4.0 GPA. She is currently a TRIO student, an Upward Bound tutor, Amigos de Pima scholarship recipient, and a PCC Merit Scholar. Her GPA is 4.0 and she is pursuing a Nursing Degree through the PCC/NAU-BSN program.

Pima Community College is incredibly fortunate to have such strong student leadership to represent the College in the best possible ways.

For more information about the 2015 Community College National Legislative Summit, go to www.acct.org.

An important piece of legislation is being considered by the U.S. Senate, S. 1334, a bipartisan effort whose impact on students at PCC and at higher education institutions across the U.S. would be substantial.

Many students at PCC and the nation’s more than 1,100 community colleges come from families of modest means and must borrow money to attend school. Subsidized student loan interest rates doubled on July 1 to 6.8 percent. S. 1334 adjusts interest rate formulas on undergraduate loans – both subsidized and unsubsidized – to lower student and parent loan rates. At PCC, more than 5,000 students are eligible only for loans. For many of these students, who balance family, work and academic obligations, the bill will help lower a barrier to attending school.

An amendment to S. 1334 was to have been offered when the bill is brought to the Senate floor. The amendment would have taken some budgetary savings from S. 1334 to increase funding to the Pell Grant program, and to restore ability-to-benefit (ATB) student aid eligibility for students enrolled in career pathway programs. Unfortunately, that amendment will no longer be considered.

Nonetheless, S. 1334 will provide a financial boost to our students, who view education as a steppingstone to prosperity. These students will be the foundation of a workforce that will thrive in a competitive global marketplace, and enhance the economic development of Southern Arizona.